Special Collections and College Archives maintains holdings related to significant players and events in the history of the United States. This includes, but is not limited to: The Revolutionary War, Civil War, World War I, World War II, Industrial Revolution, and Political Leaders. Our holdings are comprised of a variety of materials a researcher might want to investigate, including books, manuscript collections, oral histories, photographs, and artifacts. This guide will provide you with a sampling of primary sources housed by Special Collections on this topic, as well as resources to advance your research. 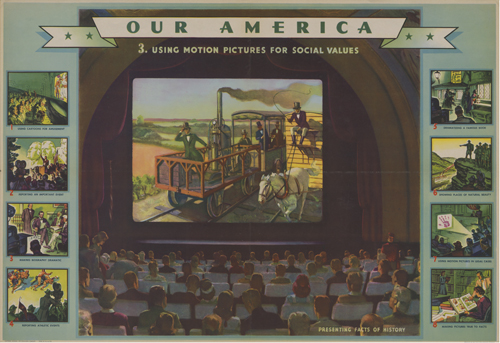 Special Collections maintains holdings related to significant players and events in the history of the United States.

This includes, but is not limited to:

Materials that may be of use for a researcher in American History include:

A copy of the Official Records of the Union and Confederate Armies, located in the Reading Room.

Anderson, Dillon. Formal expression of sympathy from the Director's Board of Monsanto Company to the family of Dillon Anderson upon his death. VFM-320 (oversized). See also - MS-088, Dillon Anderson papers.

Arms, Robert B. Collection contains many post-Civil War documents, including pension claims and correspondence between Arms and William A. Scott concerning the sale of property in North Dakota. MS-050

Beidleman, George Washington. See the correspondence (folders one and two of the collection) on the "Kansas Question," "religious atmosphere," "1860 election politics," and "Harper's Ferry incident." MS-043

Clutz, Mrs. Jacob A. Photocopy of "Some Personal Recollections of the Battle of Gettysburg," a privately published memoir. MS-13pp. VFM-179

Dawes, Charles G. Letter to Mayor H.D. Parkin from Vice President of the US, Charles Dawes, regarding a picture of General Pershing. 13 Feb 1926. TLS-1p. VFM-38

Democratic Party Platform Pamphlets. 1936. Explains all aspects, including economic, domestic and foreign policies, of the Democratic platform for 1936. 11 copies of the pamphlet. MS-77pp. VM-281

Eisenhower Appointment Books. Appointment records of 1311 pages documenting Eisenhower's meetings and telephone conversations with numerous individuals from April 1961 to October 1967 during which he occupied an office on the campus of Gettysburg College.  MS-109

Jacobs, Henry Eyster. Letter from Henry B. Jacobs containing his remembrances of Lincoln. Also, a manuscript from H.E. Jacobs. Some excerpts from the manuscript were published in Dr. Jacob's book, " Lincoln's Gettysburg World Message" in 1919. ALS-3pp. MS-39pp. VFM-79

Kennedy, John Fitzgerald. Note of thanks from Mrs. Kennedy for letters of condolence on the passing of her husband. N-2pp. VFM-83

Kissinger, Henry A. Letter from Kissinger to Pres. Hanson declining an invitation to come to campus to receive an honorary Doctor of Law degree. TLS-1p. VFM-86

National Police Gazette. Several bound issues of the National Police Gazette from 20 June 1846 - 12 Dec. 1846. Also contains several pages from the Journal of the American Temperance Union, the Oct. 1848 issue of Pittsburgh Monthly Museum, and the 1 Nov. 1846 issue of The London World of Fashion. Ms-134pp. VFM-330

Rockefeller, Nelson A. Letter from Gov. Rockefeller to Mrs. Pennell accompanying his book, "The Future of Federalism." 19 July 1962. TLS-3pp. VFM-123

"Signature of 450,000". Book published for the 65th Anniversary Convention of the International Ladies Garment Worker's Union in Miami Beach, Florida in May 1965. VFM-272

Singer, Florence. Class of 1939. Letters to Jerold Wikoff regarding her time as a missionary and listing other Gettysburg College graduates who went into missionary work. Includes copies of letters Rodger Singer wrote to his family from Hong Kong, and b/w photos. 11 items. VFM-226

Smith, Horace H. 14 photos of the ambassador's experiences in Laos, 2 maps of the region, notes from the ambassador, and an official report and Constitution of Laos. 1958. MS-84pp. VFM-134

Stambaugh, Fred. Letters of recommendation on his behalf, and copy of the official orders calling twenty-seven Gettysburg College men into action for WWII. 5 Feb. 1943. D-7pp. VFM-194

Stevens, Thaddeus. Three letters written from Lancaster, PA to either PA College or Lutheran Seminary, one was thanking the Board of Trustees for "Steven's Hall." ALS-5pp. VFM-141

Surratt, Mary E. Newspaper article and several pamphlets declaring the innocence of Mary Surratt in the assassination of Lincoln and her untimely death. Incl. 2 pictures of the execution. MS-42pp. VFM-147

Tanner, James. Letter to his friend Alfred Rowles, describing the death of Abraham Lincoln, at which Tanner was a witness. 25 April 1865. ALS-2pp. VFM-149

Taylor, Amos E., Class of 1915. Collection contains a potpurri of American history sources, including photographs and ephemera on Woodrow Wilson and typed copies of diaries that Taylor kept while at the U.S. Department of Commerce, 1930 to 1947. MS-003

Trading Card. Ephemera-1879, Tollgate No. 2. A 19th Century Victorian collectible trading card with advertisements on the back. Ms-1. VFM-326

Waller, Odell. Many bulletins, petitions, and newsletters from the Workers' Defense League in attempt to manufacture support for the defense of Odell Waller. 1942. MS-60+ pp. VFM-158

"Yank: The Army Weekly." Magazine written for and by the men in Service during World War II. September 10, 1943 Issue. Includes photocopies of the magazine. VFM-275

Yingling, Jacob M., Class of 1952. The papers document Yingling's leadership in the Maryland House of Delegates (1962-1972) and the Maryland Department of Economic and Community Development (1972-1979). In addition, the miscellaneous series contains publications related to the history of the Catholic Church in the United States. MS-049

Consult an archivist for assistance with these items.