Also available as an ebook. 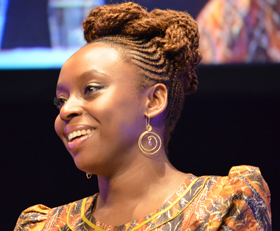 Ngozi Adichie grew up in Nigeria. Her work has been translated into thirty languages and has appeared in various publications, including The New Yorker, Granta, The O. Henry Prize Stories, the Financial Times, and Zoetrope: All-Story. She is the author of the novels Purple Hibiscus, which won the Commonwealth Writers' Prize and the Hurston/Wright Legacy Award, and Half of a Yellow Sun, which won the Orange Prize and was a National Book Critics Circle Award Finalist, a New York Times Notable Book, and a People and Black Issues Book Review Best Book of the Year; and, most recently, the story collection The Thing Around Your Neck.

A recipient of a MacArthur Fellowship, she divides her time between the United States and Nigeria.
~ From the book jacket

Four sequential discussions will be held. Please mark your calendar and do your best to attend all four.

All discussions will take place on Mondays, noon - 1:00 pm in Glatfelter Lodge or Library 18 (see email for your assignment).

More questions are available from the publisher.

This box contains links to resources shared by #GBCTalks participants!